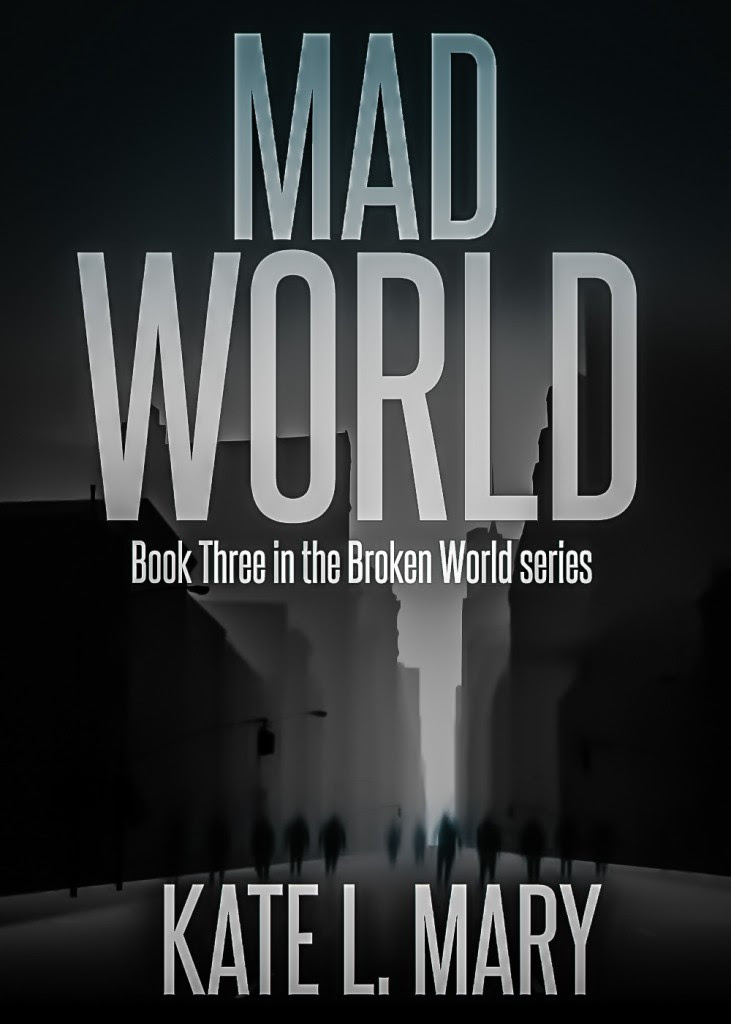 Mad World is the third book in the Broken World series, which follows a group of survivors after a super-virus has destroyed the world and the dead have come back to claim it as their own…

Vivian didn’t think things could get any worse than losing Emily, and getting to the shelter should have been their salvation. But once again their hopes where shattered when they found out things weren’t as safe as promised, forcing them to head into Vegas in search of supplies.

But now Vivian and Hadley find themselves in a situation more threatening than even the dead walking the Earth. Kidnapped by armed men and taken deep into Vegas, they’re cut-off from anyone who cares about them and thrust into a world so sick and twisted it can only be described as madness. Knowing that Axl has no idea where they are and little hope of finding them, Vivian and Hadley must team up with one of the very men who abducted them if they have any hope of escaping their new nightmare.

Watching Vivian get thrown into the back of a van almost tears Axl apart, and he’s determined to find her no matter what it takes. With the growing tension between him and Angus, Axl finds himself wondering if the price will be his relationship with his brother. Putting both old and new wounds aside, Axl and Angus must infiltrate the group holding Vivian and Hadley, and make their escape through a zombie-ridden Vegas. But the men in charge of Vegas aren’t the type to easily forget, and the group soon discovers that getting the girls out alive very well could mean the end for them all…

I push my way through the group of people gathered ‘round ‘til I find a face I don’t recognize. He’s a preppy-lookin’ bastard. Older than me, but probably not more than thirty. He’s clean. Obviously he ain’t been sleepin’ in no abandoned buildings, which means he’s with the bastards that took Vivian and Hadley. I slam him against the wall and push the barrel of my gun right between his eyes, pressin’ it into his skull. “Where the hell is she?” The guy swallows. His eyes are so big they look like they’re gonna pop outta his head. “You shoot me and you’ll never know,” he says in a surprisingly calm voice. My entire body shakes, and my finger’s just itchn’ to pull the trigger. But he’s right. I can’t shoot him. Not if I wanna find Vivian. But I could shoot his balls off. I jam my arm against his throat and press as hard as I can before movin’ my gun to his crotch. “I ain’t gonna kill you, but if you don’t tell me where she is, I guarantee that by the time I’m done with you, you’ll wish you had.” "The Monte Carlo! The Monte Carlo!” His voice ain’t calm no more. “I told ya!” Darla’s shrill voice screams out behind me. “Shut the fuck up,” I say, not takin’ my eyes off the tremblin’ guy in front of me. “She better be okay.” He nods as hard as he can with my arm pressed against his throat. “She’s fine. So is Hadley.” I wince. Damn. I shoulda asked ‘bout Hadley. Winston steps forward and puts his hand on my back. “Let him go, Axl. We need to let him talk if we’re going to figure out what’s going on." The muscles in my neck are stretched tight, and my arm twitches as I press it against the guy’s neck. I don’t wanna let him go. I wanna bash his damn face in.

I look back and forth between Axl and the fence. Between the zombies and my reason for life. “What about you?” The helicopter’s engine dies, and the moans of the dead break through the night sky. They’re louder than the roar of a hurricane. More menacing than a tornado. I can’t leave Axl. “I’ll cover you,” he yells. He spins to face the zombies. They round the corner. Fifteen feet away at the most. I grab his arm and pull him to the fence. “Come with me!” He shakes me off and looks down at my bare feet and legs. “You ain’t protected. Go!” There’s no way to convince him, plus he’s right. I’m much too exposed. I turn to the fence and climb. The metal digs into my hands and feet. The moans grow louder, and my legs shake, threatening to give out. I keep my head up so I won’t look back. Axl will be more focused if I’m safe. He can take care of himself. He will be okay. My heart races even faster. The fence is high. Maybe ten feet. My arms ache as they slowly pull my body up. I’m not even halfway there and already I’m shaky. A shot rings out behind me, and I scream. Keep moving. Don’t look down. The wind blows, showering me with bits of sand. My eyes sting and tear up. I blink, but it doesn’t help. A few tears slide down my cheeks. I hang onto the fence with one hand and use my free one to rub my eyes. They burn, but there’s no time to worry about that. I squint as more tears fall and pull myself up a little more. Halfway there. Axl grunts and Jon curses. Something slams against the fence, and the whole thing shakes. I grip the metal tighter. Fingers claw at my foot, and I scream. Kicking at them. They wrap around my ankle. I kick harder, and the fence sways. I can’t get away! My fingers curl around the metal links, and I glance down. What was once a man—his face now half-rotten—grips my ankle. His foul teeth chomp, and he moans like he’s in pain. Jon is on the ground, struggling with a zombie. Another one has Axl pinned against the fence. His knife is on the ground.

Kate L. Mary is a stay-at-home mother of four and an Air Force wife. She spent most of her life in a small town just north of 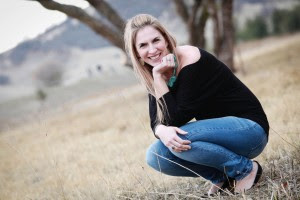 Dayton, Ohio where she and her husband met at the age of twelve. Since their marriage in 2002, they have lived in Georgia, Mississippi, South Carolina, and California. Kate enjoys any post-apocalyptic story – especially if zombies are involved – as long as there is a romantic twist to give the story hope. Kate prefers nerdy, non-traditional heroes that can make you laugh to hunky pieces of man-meat, and her love of wine and chocolate is legendary among her friends and family. She currently resides in Oklahoma with her husband and children.

Broken World (Broken World #1) When a deadly virus sweeps the country, Vivian Thomas sets out for California in hopes of seeing the daughter she gave up for adoption. Then her car breaks down and she’s faced with a choice. Give up, or accept a ride from redneck brothers, Angus and Axl. Vivian knows the offer has more to do with her double D’s 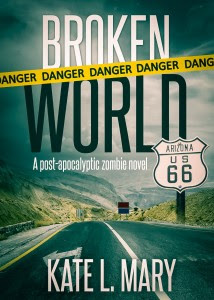 than kindness, but she’s prepared to do whatever it takes to reach her daughter. The virus is spreading, and by the time the group makes it to California, most of the population has been wiped out. When the dead start coming back, Vivian and the others realize that no electricity or running water are the least of their concerns. Now Vivian has to figure out how to be a mother under the most frightening circumstances, cope with Angus’s aggressive mood swings, and sort out her growing attraction to his brooding younger brother, Axl. While searching for a safe place to go, they pick up a pompous billionaire who may be the answer to all their problems. Trusting him means going into the middle of the Mojave Desert and possibly risking their lives, but with the streets overrun and nowhere else to turn, it seems he might be their only chance for survival.

Stranded in the middle of the Mojave Desert, surrounded by zombies, Vivian and Axl are sure they’re 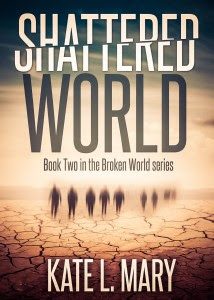 facing the end. The dead are closing in and the shelter they were promised is sealed tight. Just when they think they’ve run out of time, the doors are thrown open. Five years underground with all the provisions there for the taking. It’s almost too good to be true. With the promise of security, Vivian hopes she’ll finally able to deal with the loss of Emily, her growing feelings for Axl, and the terrifying new world they’re facing. But their sense of security is soon shattered when they discover the shelter isn’t the utopia they thought it would be. It seems the company that built the shelter decided to solve their financial problems by selling off provisions, which means the group has to find a way to get supplies. Or face starvation. And Vegas is the closest city. With her feelings for Axl stronger than ever, Vivian volunteers to accompany him and a few others on a trip into one of the biggest tourist cities in the world. Vegas is overrun with the dead, but there are other survivors as well. Only not everyone they meet is a welcome sight. As the emotional baggage piles up, Vivian and Axl’s bond grows stronger, but it doesn’t take long to realize that zombies aren’t the only thing they have to fear.

2015 is already shaping up to be a great year, and here are a few of the reasons:

1. The Wonder Twins will be starting school! Seriously, I have no idea where the time has gone.


2. I will be transitioning from a job that I'm especially unsuited for into a position that I've wanted for quite some time. It even comes with a salary increase :)

3. Last but not least I will have three, count 'em, THREE books coming out in 2015! The release schedule is as follows:

Some of you may remember Heir to the Sun when it was first released back in 2011. It's been reworked with a fresh new edit, new cover and lots of extras! I'll share the cover as soon as I can. I'm very, very happy that I'll be able to get Parthalan's stories out into the world again. In case you missed the cover reveal for Copper Veins, here it is:

This rather intense release schedule segues nicely into the resolution portion of this post. They are, in no particular order:

1. Promote my work in new and innovative ways
2. Make connections with other authors who write in similar genres. Network, network, network.
3. Read more comic books. Watch more cartoons. Make time to play.
4. Trim down my extra assignments and concentrate only on those that can further me as an author.

The last one is going to be a long process, and it will probably take me at least half the year to figure out what works and what doesn't. I've already decided to stop a few assignments, and I may dispense with a few more.

All in all, I think 2015 is going to be great. What are you looking forward to this year?